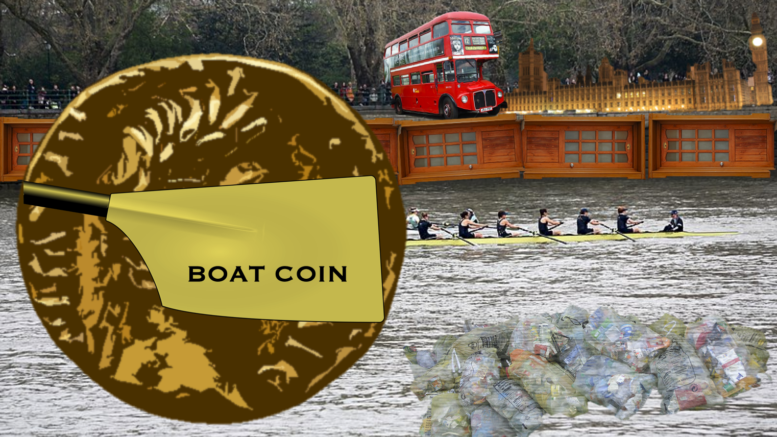 Gemini, a cryptocurrency platform that is the ‘principal partner’ of this year’s Boat Race, has today announced the release of ‘Boatcoin’, a currency directly tied to the intensity at which rowers boast about their latest ‘erg times’.

The Boatcoin has been launched to fund improvements to this year’s course, and market experts have suggested that the value of the new coin will start “obnoxiously” high, before gradually rising with each social scenario a rower can insert a desperate slew of numbers and jargon into.

Using the money generated from the coin’s release, Gemini have vowed to recreate the atmosphere of the Thames after this year’s Boat Race was moved to the Great Ouse. “We really wanted to make sure that the rowers get a true taste of The Boat Race in this unexpected year,” said Gemini founder Derek Coyne. “That’s why we have dumped 600 kilograms of assorted plastic waste into the river and prerecorded hecklers calling the teams ‘posh wankers’, for the authentic London experience.”

The Cambridge University Civil Engineering Department’s Cardboard Division have also lent a hand, recreating the famous landmarks of the Houses of Parliament and Ken’s Kebabs Hammersmith solely out of Amazon packaging. TfL have also provided a double-decker bus that will be left idling on the muddy banks of the Great Ouse to provide the thick, diesel fumes London would be incomplete without.

Despite these efforts, this year’s Boat Race is behind closed doors. This has resulted in a national shortage of wooden entryways, after B&Q and Wickes were raided for the 7,436 required to construct such a perimeter. Senior Pro-Vice-Chancellor for Aquatic Sport and Academic Palm Reading Graham Virgo added the catchy but important message “Stay safe, stay away, watch The Boat Race 2021 live on the BBC,” a slogan commissioned by the University from the Poet Laureate, Simon Armitage.

Virgo also made it clear that under no circumstances should students spectate the race, before revealing its exact time, location, and detailing the small tunnel that he had bored under the line-up of doors halfway along the course. Many have speculated that Gemini is actually a front set up by Virgo as part of the infamous ‘Astrological crime syndicate’, who only strike when the stars align. After The Tab revealed that Virgo was actually a Gemini, yet another hard-hitting question is raised: what is Graham Virgo’s birthstone?