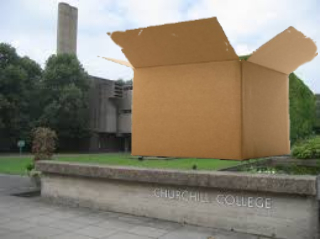 Churchill College has today announced that the entirety of its campus will be placed in a giant cardboard container for its own protection.

Amid repeated attacks by anti-racism protesters on monuments to controversial historical figures, the college’s initial plan was to staff its perimeter with a battalion of heavily unarmed Community Support Officers. However, as the officers arrived on the scene, some wondered whether their intervention had come too late.

“The college has clearly been subject to a number of appalling attacks,” said PCSO Atherton. “Just look at the shape of the buildings! I would go as far as calling the culprits brutalist.”

Cambridge community support officers did have some success, however, in arresting the original architect on charges of criminal damage, as well as a man caught urinating on nearby Fitzwilliam College. The latter issued a bashful apology, describing his actions as ‘uncouth’, although he claimed in his defence that he had no idea Fitzwilliam was even a real Cambridge college.

The college had reportedly been mooting a raft of alternative self-defence measures. These included shielding the college under a massive transparent dome and renaming itself ‘Marx and Engels College’ to appease demonstrators.

Cambridge’s friendly neighbourhood fascists had also pledged their support to the college, although were forced to cancel their ‘counter-protest’ after infighting and disillusionment decimated their ranks. Many felt that they had been tricked into thinking Churchill might actually be worth defending, whilst others found themselves questioning their group’s subversive ideals, claiming that a group of Nazis marching through British streets was exactly what the Prime Minister stood for. Those who chose to stay told the Porter’s Log that they were carrying out a very important job of protecting the rest of Cambridge from Churchill College.

Given these failures, a giant cardboard box was deemed the college’s most viable option. The move has been met with near-unanimous approval on the grounds that it will constitute an immense aesthetic improvement. However, a small minority of history students stand in protest.

“This is an affront to British history,” claims Timothy Bainbridge-Stewart, who was out last week protesting his right to a haircut. “If we cover up buildings and lumps of metal, how can we possibly be expected to learn from our past?”

Bainbridge-Stewart was left dumbfounded when he was later introduced to a remarkable, ground-breaking new invention known as ‘a book’.