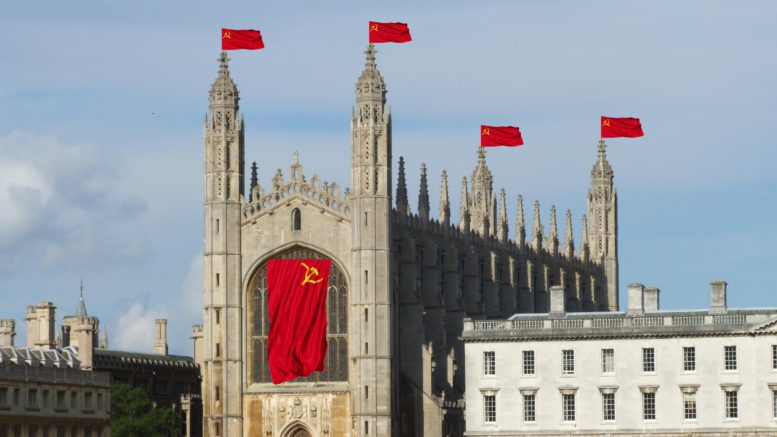 Proletarian revolution has gripped King’s College after the results of an internal referendum revealed the majority of students wanted the Soviet flag removed from the college bar.

This decision spurred a reactionary movement from radical elements within the college, resulting in second year undergraduate Marcus Atherton being named the first ‘Supreme Leader’ of the King’s College student body.

Key to the insurrection was the unexpected unveiling of ‘Purgebridge’,  a new Facebook page specifically aimed at halting the rise of capitalist and liberal thought in the College. Students have used the page to anonymously accuse their peers of all manner of nefarious acts against the College’s fledgling Worker’s State; from traitorous collaborationism with members of the Pitt Club to stealing milk from comrades. Implicated students are subjected to humiliating show trials in front of hastily assembled revolutionary tribunals, and those found guilty are set to work – either growing food on the Backs, or in the library writing essays for Party officials.

Despite the change of college management, the vote to take down the Soviet flag has been honoured by the revolutionaries. Supreme Leader Atherton said “the Soviet flag will remain down, in order to demonstrate the respect that my newly formed authoritarian regime has for democracy. This is a bold new step towards modernisation for both the Party and the College. After all, it has been 30 years since the fall of the Berlin Wall. As part of this image change, we will be replacing the old flag with an even larger North Korean one – the Democratic People’s Republic of Korea is much more current.”

The spread of the revolution into all facets of the college has been rapid. Machine gun emplacements and barbed wire have sprung up all along King’s Parade, and the wearing of approved College stash and branded Ushankas has been made mandatory. Economics students deemed “suspect” have been sent to re-education camps across the Cam, and certain approved Engineering students have been set to work building a nuclear warhead. The changes have even affected the most traditional aspects of college life, as the chapel choir’s stirring renditions of the Internationale and the Soviet national anthem on a Sunday morning prove.

The uprising has been particularly well received by college bureaucrats, who are finding that the increased power of their positions more than makes up for the risk of being sent to the college Gulag. Horatio Dunlop, the newly appointed People’s Commissar for Socialist Recreational Activities, commented “Purgebridge has revitalised college life for me. When I was an ents officer, we had constant problems with people complaining about the quality of bops – but now attendance is up to 100%, and complaints are punishable by hard labour. I love complaints!”

“Admittedly there were some growing pains under the new regime, like when the bar starting selling Molotov Cocktails – but it has all been fine since we made it clear that people are only allowed to use them in the smoking area. The Porters have really taken to their new leather trench coats and submachine guns, and we expect that our industrial capacity will be greatly improved by the implementation of the first Five Term Plan. King’s College can certainly look forward to a glorious and prosperous future under Supreme Leader Atherton!”

Noted Canadian, and Vice-Chancellor, Stephen Toope has commented on the developments, saying “I wholeheartedly welcome student politics and its contribution towards shaping the leaders of tomorrow, even when I do not personally agree with the opinions displayed. That said, I would appreciate it if they would stop sending people to try and assassinate me with ice axes.”