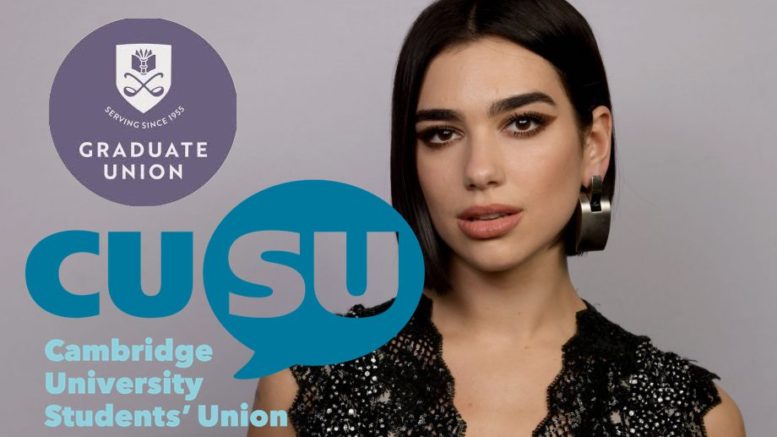 Chart-topping musician Dua Lipa stunned students across Cambridge on Monday by coming out in favour of the proposed ‘New-SU’ student union merger.

Speaking at the Union, she argued that CUSU and the Graduate Union would be more effective as a single body, giving an unexpected musical performance in which she repeatedly assured her audience that ‘one CUSU’s all it takes’.

The singer also waded into the discussion regarding the university’s disciplinary procedures, citing the importance of having ‘new rules’. However, she is reported to have later said that she would steer clear of student politics in future, after having dined with members of the Union committee on Monday evening.

Dua Lipa’s views on New-SU are not without controversy. The merger has already been referred to Magrethe Vestager, the EU Competition Commissioner, following fears that it will create a monopoly on student representation in breach of antitrust laws. There are serious concerns that with the two student unions becoming one, there will be fewer opportunities for students to engage in meaningless voting and virtue signalling.

There are also some students who are campaigning against the move, arguing that it would lead to a “dangerous concentration of inefficiency.” Asked to comment on the matter, one professor of mathematics simply replied, “0 + 0 = 0”.

Others have joined Dua Lipa in defending the proposed merger. The CUSU Sabbatical Officers released a statement on Tuesday, saying “We believe this change is absolutely vital in making sure CUSU maintains its relevance in the student sphere. Without it, people will probably forget that we even exist. It has actually given us something to do. Where’s the harm in that?”