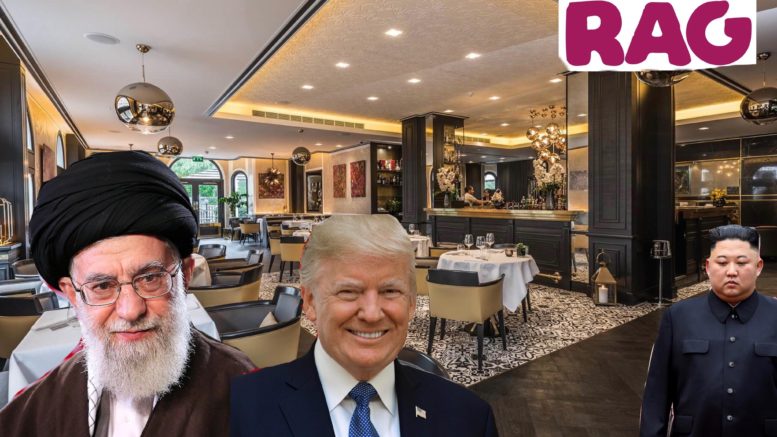 Having agreed to meet in The Regal and ‘see how the night goes’, things got off to a dreadful start between the pair. Khameini, feeling short-changed by RAG’s bribery policy, spent the first portion of the date insisting loudly that golf is not a real blue.

The mood improved after the fledgling couple held crisis talks, with Khamenei asking Trump to ‘pull for a chat’, but any inkling of romance was instantly snuffed out when, in trying to heat up the encounter, the Middle Eastern leader mistakenly texted Trump ‘send nukes’ in Iran’s second most embarrassing technological blunder of recent weeks.

This failure was received warmly by Trump’s bitter ex-partner Kim Jong-un, who sacrificed half his nation’s GDP to pay the £15 bribe for a major world leader. He’d allegedly even attempted to sweeten the deal with repeated messages offering to show Trump his ‘missile’, before being forced to settle for a date with a man who could’ve been either Congolese President Nguesso or Canadian Prime Minister Justin Trudeau.

Another past flame, Putin, was initially chosen by RAG as Trump’s match. However, it is reported that he aggressively refused to go on a date with another man, instead electing to attend a homoerotic topless photoshoot on a horse for the music video of ‘Ram Ranch 2: This time it’s Chechnya’. RAG’s second choice, Australian Prime Minister Scott Morrison, cancelled at the last minute, explaining that he was ‘a bit under fire right now’.

Details emerged of an awkward reunion between Trump and Khamenei in Cindies two weeks later, with both desperately trying to avoid eye contact as they danced to the dulcet tones of Muse’s ‘Drones’. The following day, Trump branched out from his preferred domain of the Twittersphere into Camfess and had every submission rejected. Leaked entries of his include ‘Who needs £550.44 when you can get a small loan of a million dollars’, ‘how do I make friends in 4th year (of office)’ and ‘feel like pure shit just want Soleimani back’.