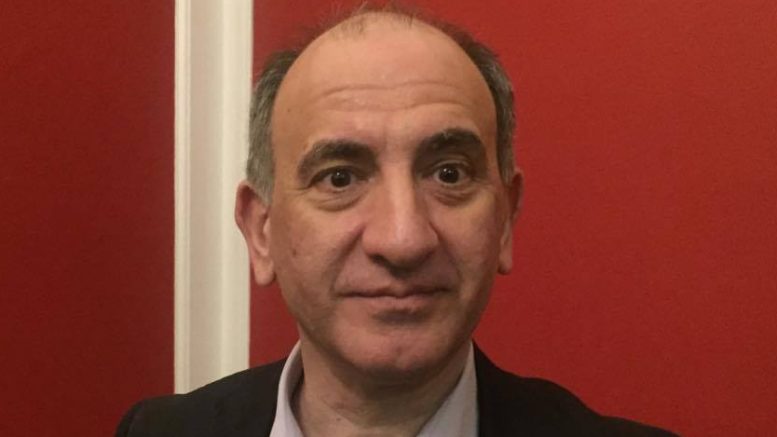 Armando Iannucci in The Kennedy Room at the Cambridge Union

Fresh from a talk at the Cambridge Literary Festival, Armando Iannucci bounded into the room and shook our hands. The creator of Veep and The Thick Of It had spent the evening telling a packed out Cambridge Union about his career in comedy and was set to present his new film The Death of Stalin at an Italian film festival the following day. Though we only expected a brief sit-down with him, he gave us half an hour.

We started by posing him the same question we had asked John O’Farrell in our last interview: What can satire do? “Fuck all”, he jokily replied with lightning speed.

However, there are clear differences between these two satirists’ positions. While O’Farrell believes that satire itself can undermine our faith in democracy, Iannucci thinks that the biggest challenge political comedy faces today is Donald Trump.

“We mustn’t just turn him into a cuddly clown cos he’s more dangerous than that”, he explains. “My worry is that if you go the old fashioned route of doing an impression of him or a fictionalised version… it just normalises it and it becomes a kind of entertainment but nothing more.”

Iannucci stepped down as the showrunner of the acclaimed American political satire Veep in 2015, just before – as he sees it – reality began to outstrip comedy.

With Trump ripping up the rule-book of conventional politics, Iannucci says that comedians have had to think long and hard about their own roles. “If he’s the crazy satirist, what are we?” he asks.

As well as pushing him to make his first feature-length historical comedy, this new political climate seems to have spurred Iannucci to take politics even more seriously. He has been one of the most prominent voices calling for a unified, cross-party response to Brexit.

“I’m not saying we shouldn’t joke about what’s happening but I’m just a bit relieved that I’m not expected to, as I find it a bit depressing. The issues that are being looked at now are so big and so vast that I just want to look at those issues.”

A look of exasperation flashes across his face.

“Brexit’s the biggest thing to hit Britain since the Second World War. Isn’t it just absurd that they still don’t know what it’s going to be and that they’re more concerned with outgunning each other within one party rather than saying ‘what kind of a country do we want?’”

This more directly engaged stance seems a striking departure for the Glasgow-born satirist, even if he is separating his work from it. When The Thick of It first hit our screens in 2005 it was a strikingly new approach to political comedy which found humour in the swirling systems of fixers and spinners surrounding MPs. Iannucci says he wanted to “get behind what’s going on” and ask “how do ideas get discussed, how do ideas become a policy?”

The Thick Of It, and its American equivalent Veep which premiered in 2012, were refreshingly uninterested in launching Spitting Image­-style attacks on real politicians. Last month, John O’Farrell told us he believes this kind of satire can make us feel mockingly superior to our MPs and weaken our faith in democracy.

But Iannucci strikes a sympathetic tone when discussing Thick of It politicians such as Nicola Murray and Hugh Abbott. “They’re not committing a crime, they’re not evil people. They went into politics because they thought they could do something.”

Perhaps the most loved and respected political satirist on both sides of the Atlantic makes a point of stressing just how difficult a politician’s job is today.

“We, the public, expect our politicians to be utterly blameless, to have an answer to everything, never to go on holiday, and just not to have a life but to be these machines that will just do our work for us. And if they malfunction as a machine then they should be crushed.”

His latest project, the film The Death of Stalin, is also interested in the behind-the-scenes machinations of political figures, though this time his subject is the General Council of the Soviet Union in 1953. While his contemporary satires easily avoided being offensive about real, individual politicians, this new venture clearly enters much riskier waters.

He tells us that one of his main concerns while editing the film was to ensure that the dark side and the funny side of the film were both present but did not detract from each other.

“I wanted you to feel how people must have felt at the time, which is just a low level nervousness, cos they’ve had to live with it for 20 years,” he says.

“I discovered that they circulated joke books about Stalin in the 1950s but if you were heard telling one of those jokes you would be shot. And yet they still wrote jokes about him.”

Iannucci seems pleased with the reception the film has received and mentioned in his talk that he had been congratulated on it by people whose parents had survived the gulags.

Given the positive response to The Death of Stalin, we pressed the subject of offensiveness in comedy on a broader scale. Generally opposed to the principle of no-platforming, Iannucci says he worries that we shy away from being offended.

“If we have certain beliefs, whether they’re political beliefs or religious beliefs, they should be able to withstand a joke or an argument against. That idea of saying ‘I don’t want to countenance any kind of argument against what I believe’ just strikes me as cowardice really.”

But he is careful to clarify how this relates to his work. “The intention is never to think ‘Oh, let’s annoy lots of people’. It’s just what makes me laugh. But also sometimes things are funny because they’re slightly crossing a line or because you think ‘I shouldn’t be laughing but there is something funny about that’.”

Our conversation so far has skirted around some supremely important questions: in this age of ‘fake news’, Trump and a sense of dismissiveness towards conventional politicians, what approach should satirists take? If reality is outstripping comedy’s ability to satirise it, then what next?

Iannucci has an answer: “The next step now is going okay, let’s be journalistic about it, let’s actually research, let’s analyse.”

He cites John Oliver and Samantha Bee in the US as typifying this new wave of journalistic comedians “who have teams of writers [and] are actually doing a much more forensic analysis of the truth and just presenting it nightly.”

For Iannucci the emphasis on ‘narrating the chaos’, as John Oliver has put it, can still be as funny as any other kind of comedy, even if it has a deeply journalistic, didactic message at its core.

Perhaps the more pressing concern is that apart from the first half of a copy of Private Eye, this kind of satire does not exist in the UK.

In the first interview in our series, The Mash Report’s Tim Telling told us he felt there was considerable pressure for British satirical shows simply to imitate The Daily Show. And while Iannucci has a lot of time for Channel 4’s The Last Leg, on which he has appeared several times, he accuses British broadcasters of “chickening out”.

The danger, it seems, is that if television commissioners do not start taking more risks, the UK might miss out on this latest wave of more journalistic, narrative satire.