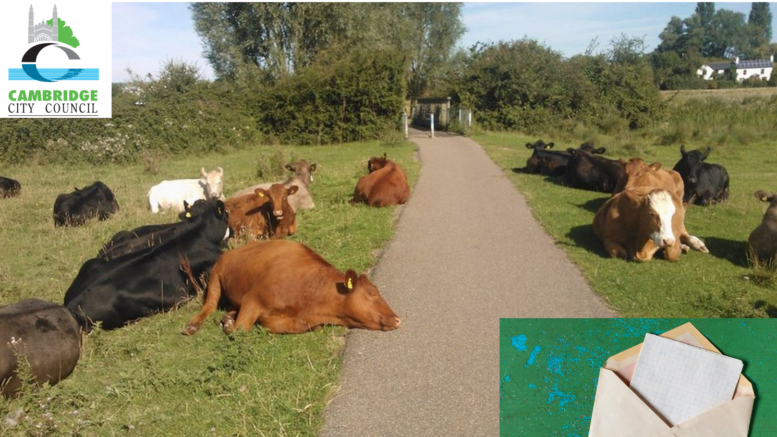 The epidemic of open letters has spread further, with the cow population of Cambridge coordinating to lobby the city council to reverse their decision on the cows’ location.

Read the mooving missive written by the bovine residents of Midsummer Common, exclusive to the Porter’s Log:

Attention, humans (and students) of Cambridge,

I, Veroni-cow Moo-ller, am the leader of the Cambridge City Cow-ncil, the democratically elected body that represents the interest of the many cows that call Cambridge City Centre their home. Over recent weeks, it has come to our attention that the city’s human council is moo-ting new measures concerning their bilateral relations with our organisation, measures which, if implemented, could result in our re-moo-val from the beloved stomping grounds we have called home for centuries.

We, in this open letter, wish to express our vehement opposition to the council’s plans, and explain why they would be so udderly devastating for all of our steak-holders.

Firstly, we consider this latest development yet another example of a clear, deep-seated anti-cow bias that pervades every single Cambridge institution. The first signs of this appeared when the rewilding of King’s meadow meant we were forced to graze even closer to that udder moo-nstrosity of a college. Is having to listen to fellows record mindfulness videos in our paddock not punishment enough already?

To add insult to injury, the university followed this up by taking the decision to ban beef from all of its restaurants and cafes. Yes, I know we burp and fart a lot, but it’s a bit mean to say that bovine flatulence is single-handedly causing the downfall of humanity. We don’t point out your little flaws. Now, as if that wasn’t enough, the council wishes to evict us from our homes, merely because one of us fell into a river. This is not acceptable. We endured with tacit complicity previous acts of discrimination against our species, but cannot stand by any longer while our rights are eroded. It’s time for us to put our hoof down.

Secondly, the city council has been lying to you. They claim that the reason for our removal from the city centre is because they are unable to continue funding the ‘Pinder’ service, which supposedly enables humans to come and rescue us when one of us gets drunk and decides crossing a cattle grid might be good fun. This, of course, is all bull-shit. ‘Pinder’ is the dating service we use to ‘steer’ lonely sows towards their future spouses.

The real reason behind the council’s plan to eject us from our homeland is that, in cow-hoots with Tesco, they are concocting a secret campaign, otherwise known as Operation Lasagne, to replace us with horses. This cannot be allowed to happen; we can’t stand those bloody horses always looking down their noses at us.

In conclusion, we hope that the noble humans (and students) of Cambridge will take the bull by the horns (incidentally bullhorns would be very helpful for our protests) and lend their support to our moo-vement. We will never give in, we will never be silenced, and if need be, we will fight and fight until the cows come home.