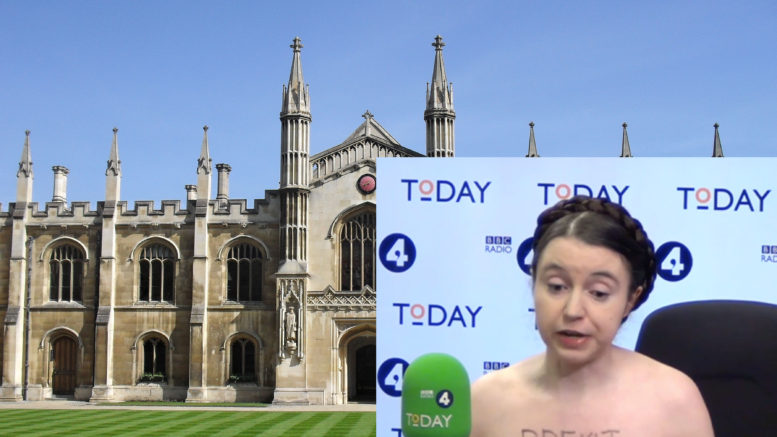 A Corpus Christi student has claimed that he was simply trying to curry favour with his supervisor, Dr Victoria Bateman, after being caught naked in another student’s room by a College Porter.

Porters were initially summoned in the early hours of the morning, after a series of complaints had been made regarding the ‘intense ad hominem rhetoric’ emanating from the student’s room.

According to the students involved, the tête-à-tête revolved primarily around a strenuous discussion of the Irish Backstop, and that one of them had simply been advocating vigorously for a hard border. It is also reported that, although a one-on-one debate had been agreed, one member had not been averse to a third party having their opinion heard.

Other items on the agenda included an earnest conversation about Johnson, although it wasn’t anywhere near long enough to provide a satisfactory conclusion.

By the time the duty porter arrived all the selected areas of discussion had been meticulously scrutinised and the participants were in the process of making their closing remarks. As soon as the Porter arrived, the student is said to have quickly softened his stance.

Emily Milton, the College Dean, released the following statement with regards to the incident.

“Though our College respects and encourages freedom of debate among our students, there are occasions we have to ask our students to keep the noise down for the sake of their neighbours.

“Unfortunately, this debate, in which one of the participants was repeatedly shouting ‘Oh Yes’, seemingly in recognition of the strength of her opponent’s argument about the disadvantages of a No-Deal Brexit, was one such occasion.”

The fellow at the heart of this controversy, Dr Bateman, recently donned her birthday suit during an appearance on the Today Show opposite John Humphreys, where she challenged arch-Brexiteer Jacob Rees-Mogg to a naked debate.

Her intentions have been met with a flood of online responses, most notably from Canadian Vice-Chancellor Stephen Toope, who tweeted: ‘Tell Rees-Mogg he needn’t bother. If it’s a master debater Dr Bateman is looking for then I’m her man.’