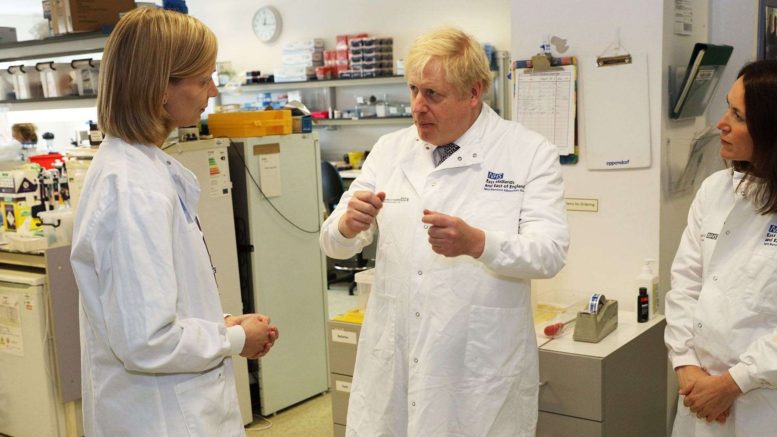 The Prime Minister, who was yesterday ‘booed out’ of Cambridge’s Addenbrooke’s hospital, today insisted that the NHS was just sending him off with seasonal goodwill.

‘Claims that I was sent off with anything other than timely banter are utter codswallop,’ Johnson told The Porter’s Log. ‘Dressed in white, covered in blood and looking frighteningly overworked – those doctor’s outfits were really quite convincing!’

Johnson’s PR team maintained that rather than showing contempt, doctors were harmlessly booing him, calling him a twat, and screaming, just like any other normal Halloween.

Marcus Atherton, a Paediatrician, admitted that he thought Johnson’s arrival was part of a twisted Halloween stunt.

‘He gave the doctors the fright of our lives. At first glance I thought that a rapid orangutan who’d been kicked through TM Lewin had bounded into my operating theatre. But then I realised it was the PM and I nearly went into cardiac arrest.

‘He screamed ‘Lock me up! I’m a slasher!’ before tearing in half another NHS funding bill.

‘I was left dealing with three casualties and my only nurse has fainted. My next day-off has been rescheduled for May!’

‘That should haunt those pesky doctors for years.’ Johnson cooed.

There were also claims that Johnson had used the trip as a PR stunt. Johnson’s stunt-double dismissed these allegations before summersaulting out of the nearest window while 50 extras applauded.

When Johnson himself was asked for a straight answer he wildly gesticulated and blurted out ‘non ducor duco’. Before his executive director ushered him away from reporters.

CUCA sympathised with the Prime Minister, themselves stating that Halloween was a hard time for Conservatives as they were constantly mistaken for ghoulishly pale white children.