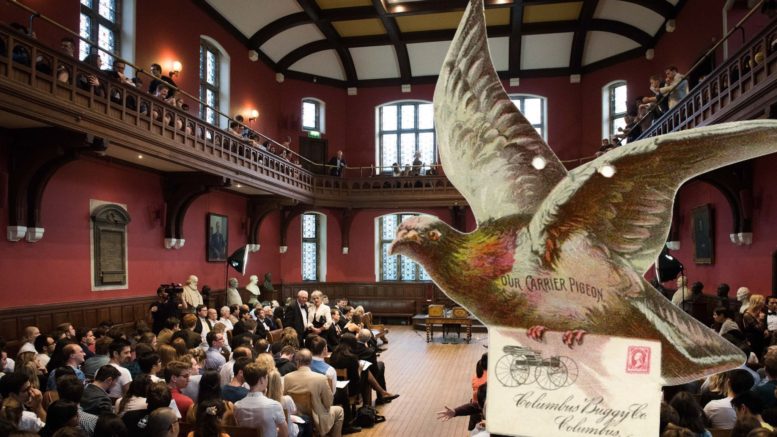 The Oxford Union have today sent a carrier pigeon to press offices across the country apologising for violently removing a blind student from his seat during a debate.

The gilded scroll, sent by their communications and entitlement officer, was dropped on the doorsteps of various press officers this morning.

Responding to claims that their method of communication was outdated, Marcus Atherton, the Union President defended his choice:

‘We thought that by sending our carrier pigeon, not only would we be delivering a much-needed apology, but we would be proving to the unwashed masses that we are a modern and progressive society.’

‘It’s as close to killing two birds with one stone as you could literally get. Although generally I tend to prefer using my 12-bore shotgun – it is much more effective for game birds.

‘We’ve communicated using carrier pigeon for centuries, why on earth would you expect us to update our system to suit today’s climate?’

The Union also used this opportunity to introduce its new access scheme.

‘We are confronting this access problem head on. Our new scheme will widen our scope of recruitment to include even minor public schools.’

Meanwhile members of the Cambridge Union hit back at comparisons to the Oxford Union:

“We are disappointed that the Oxford Union have been recognised as the most backwards and entitled society in England. We know that Cambridge is a far more archaic institution and will be fighting to have our position reinstated.