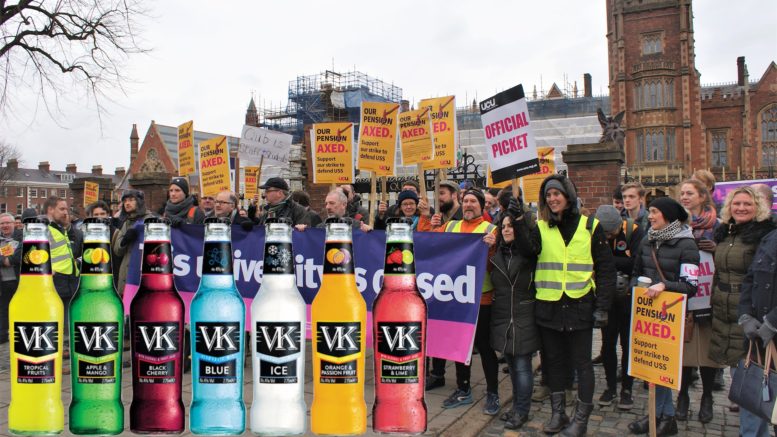 By simply not bothering to turn up, hungover students will avoid conflict of interests over the strikes and stay well away from picket lines.

“Forget Strikebridge and those breakfast supply runs,” a representative of the strikers told The Porter’s Log. “It’s the students who spend all night out drinking who are the real heroes of industrial action. No other group has contributed so much to low turnout.”

This praise comes as many Cambridge nightclubs come out in support of the ongoing strikes. ‘Support your lecturers! Get shitfaced!’, reads one piece of propaganda.

Cindies, meanwhile, will be hosting a Strike Night this Wednesday in partnership with UCU. They promise repeat playing of ‘Oh— Jeremy Corbyn’, and absolutely no chances of making it to lectures. This night will also see the release of the limited edition Cambridge Blue VK – buy four for ten pounds to support improved working conditions.

Students have embraced this form of armchair activist with open arms and aching heads. Marcus Atherton, Kings 2nd year, groaning, sipping a Lemsip, and with a smudged club stamp on the back of his hand, spoke to us from the comfort of his bed about supporting UCU.

“Yeah, I would have made my 9am if not for my strong moral compass, for sure,’ he said, before going on to praise hangovers.

“On top of having a great night I now know that I AM a better person that the rest of my cohort. I was always so intimidated by those social justice students, acting like they’re so much better than everybody else. Now, thanks to the power of alcohol, I can be just as smug as they are.”

Getting absolutely plastered is one of several ways students have been dealing with strike action. A group of archeology students are reportedly tunneling under picket lines to access their libraries. Several mathmos, meanwhile, have found themselves unaffected, as they are yet to leave their rooms this term.