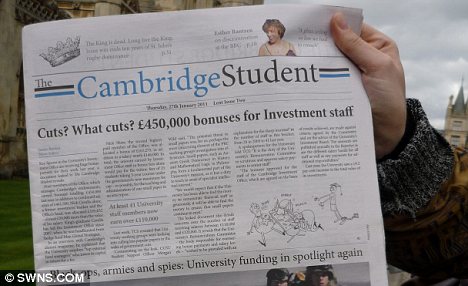 In a year full of surprises, none was less eagerly anticipated than the return of the print edition of The Cambridge Student, the newspaper equivalent of the human appendix.

“It’s just sad,” said Marcus Atherton, a third year at Jesus College. “Have you every heard of Florence Foster Jenkins? It’s like that, except not even Meryl Streep could make TCS interesting.”

A spokesman for the paper explained their media strategy: “We will publish anyone. Literally, anyone. We have a diverse group of writers, including your friend who Varsity won’t publish and your other friend who The Tab won’t publish. To boost distribution, we changed the game by hiring more editors than we have readers.”

TCS is now locked in a battle with the Cambridge Review of Books and a fifth generation Trinity student’s kidney to become the most pretentious organ in Cambridge.

Asked about how they planned to compete with Varsity and The Tab, the spokesman said: “Think of TCS as the weak kid in school whose lunch money the bigger newspapers steal everyday. You feel sorry for that kid, right? Well, so does CUSU apparently.”

CUSU have decided to fund the revival of TCS’s print edition. A representative explained why they had allocated funds to TCS: “We know the second national lockdown and all the extra restrictions have had an adverse affect on student mental health. That’s why we decided what students really need is a physical copy of Cambridge’s third largest student newspaper. Think of it as pretentious toilet paper.”