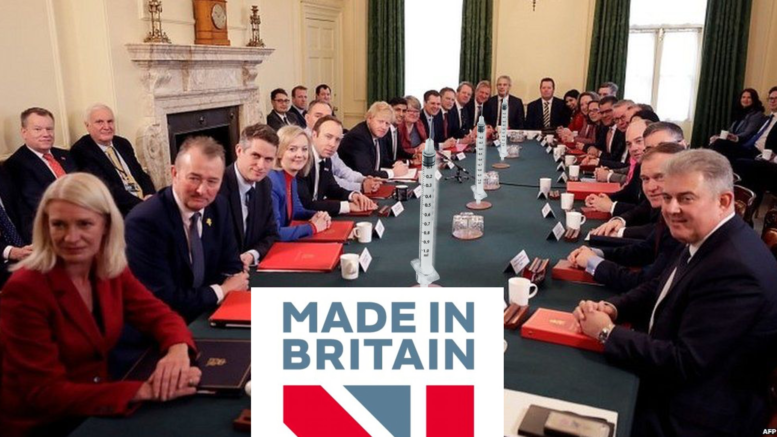 With the EU’s ongoing row with British-Swedish pharmaceutical firm Astrazeneca threatening to jeopardise imports of Pfizer vaccine doses into the UK, the government has today sought to downplay concerns by insisting that it already has a sufficient supply of ‘little pricks’ available to its population.

The pricks in question, currently being stored at room temperature inside the Cabinet at 10 Downing Street, are rumoured to provide up to 90% protection against an array of diseases including rational thought, decisiveness, and competence. In particular, the single-dose Johnson & Johnson pricks, which offer additional protection against the effects of travel bans and long-term marital fidelity, have been shown in trials to be 99% effective.

“The UK government has been hoarding pricks since before 1997, so we are confident that all of our objectives will be met as planned,” said Boris Johnson in a televised address to the nation yesterday. “I also wish to take this moment to reassure the UK population that a little prick is nothing to be afraid of. At least, that’s what the Eton prefects told me…”

To scale up the roll-out of its inoculation programme, the UK has also announced the establishment of a new roving vaccine distribution unit, to be housed in Cambridge’s very own Van of Death. Explaining the government’s decision, a spokesperson informed the Porter’s Log that the Van of Death had been selected on account of its name, which the government considered a perfect reflection of its preferred Covid strategy.

The Van of Death, in spite of its new role, has not been immune to criticism. Many expressed concern at previous failures to suppress misinformation, citing its repeated refusal to remove the words ‘fresh vegetables’ from its ingredients lists. A government press release denied any accusations of false advertising, stating: “This government has never written lies on the side of a vehicle and this will be no exception.”

Russian President Vladimir Putin also expressed misgivings over the government’s choice of the Van of Death. “We used one of its burgers to poison Navalny,” he said. “But despite what the title suggested, the bastard survived. I was furious.”

As a token of gratitude for the Van of Death’s service to the UK vaccination effort, the government has raised its hygiene rating from a 0 to a 1.