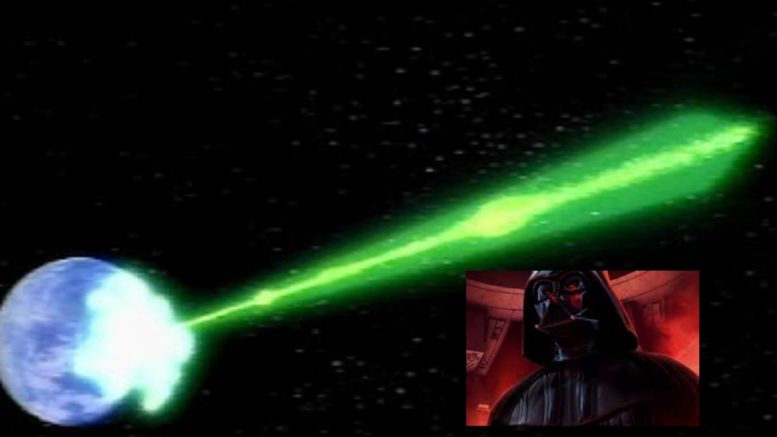 Sith Lord Darth Vader has become the subject of a galaxy-wide race row.

Vader has been roundly condemned for suggesting that the destruction of the planet Alderaan by the Death Star’s mega-laser earlier this year was not in fact genocide.

The incendiary comments were made during an hour-long phone-in segment of the popular holo-radio show Tattooine Today. “Well, it couldn’t be genocide, could it?” the master of the dark arts said, indicating the captive Princess Leia behind him. “Otherwise there wouldn’t be so many damn Alderaanian rebels on my spaceship.”

Critics of the totalitarian Galactic Empire have said they are unsurprised by Vader’s remarks, given the insidious organisation’s appalling track record on dealing with structural racism. They cite the worrying eugenicist practices and racially-charged uniforms of the stormtrooper programme as a key example of what they consider to be deep-seated, exclusionary pro-white bias in the law-enforcement body. In addition, the Empire’s silence on the vile abuse suffered by minority figures such as Jar Jar Binks has been taken as a clear sign of its indifference to the plight of the vulnerable.

The systematic neo-colonialist exploitation of indigenous tribes on planets such as Mustafar to provide equipment for the Empire’s bloated military has come in for particularly heavy criticism. “It’s all utter nonsense,” Emperor Palpatine responded angrily. “When I see these people on my publicity tours, their faces light up. And not just because I sometimes zap them with my force lightning for not working hard enough…”

Palpatine’s comments were quickly dismissed by the Rebel Alliance as ‘typical of just another old, out-of-touch, privately-educated white man in a position of power’.

All across the galaxy far, far away the values of inclusivity and tolerance have taken root, leading pan-galactic sensation Jabba the Hutt to open up on his struggles with obesity. “I’ve undergone three liposuction surgeries in the past year,” he wrote in a lengthy Twitter thread. “Only now do I realise I should have embraced myself for who I really was in the first place: a fat, dirty, lecherous slug with an inexplicable homoerotic desire to hang a frozen Han Solo in my hallway.”