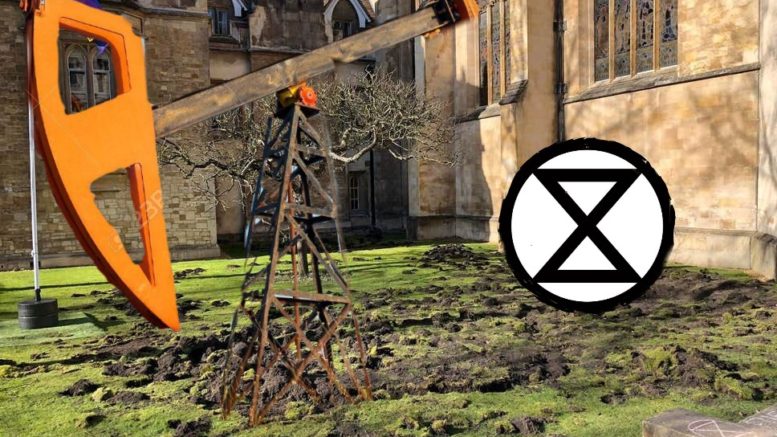 The discovery was made early yesterday morning, as protesters demonstrated their disgust at Trinity’s environmental indifference by assisting them in destroying the planet. Witness reports suggest that, after a viscous black liquid began to spurt from the ground, XR members seemed initially confused as to what it was, with one instinctively setting fire to the substance and declaring it the solution to the question of sustainable energy. However, after Trinity porters were dispatched to construct a gigantic oil rig on the site of the reservoir, it became embarrassingly clear that the movement – which is definitely not a cult – had shot itself in the foot.

As news about the well spread, a number of organisations descended on the lawn, each with their own plans to exploit the resources on offer. BP was the first to arrive, so impressed with the protesters’ knack for sniffing out petroleum deposits that they recruited a number of them as dowsers. America subsequently announced its intention to invade Cambridge, whilst at the mention of the word ‘rig’, a representative from CUSU suddenly appeared and delivered a two-hour sermon on NUS electoral policy.

The college itself has remained remarkably coy and declined to comment on recent developments; as experts suggest, making money from oil isn’t exactly a novelty for Trinity’s governing body.

Meanwhile, in a week where Extinction Rebellion has already been excoriated by the press for its belligerent and hostile approach, this incident has served only to further exacerbate the organisation’s precarious situation. In an attempt to clarify its intentions, XR’s spokesperson issued the following statement:

“Our aim is to set an example for people to follow. Defacing public property, committing criminal damage, preventing students from gaining an education – such exemplary, altruistic behaviour is what we hope the public will start to incorporate into their daily lives. And if they don’t, fuck the planet-hating bastards.”

In a similar incident, Barclay’s Bank on St Andrew’s Street was targeted by demonstrators who scattered soil over the shop floor and lay in it as part of a so-called ‘die-in’ protest. Staff have been busy cleaning a large number of bank-notes stained in the process, although the company has denied accusations of ‘money laundering’.