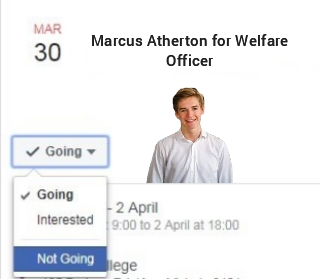 A first year student eager to make inroads in student politics REALLY wants you to click ‘going’ to the Facebook event advertising their run for a JCR committee position.

Marcus Atherton, a classicist at Selwyn, couldn’t contain his excitement as he announced to his year’s group chat that he would be running for the position of Green, Ethics, and Faiths Officer. He told the Plog:

Explaining why he chose to launch a Facebook event to advertise his campaign, Marcus had the following to say:

“I just thought it would be immensely appealing for all members of my year to be spammed incessantly with campaign plugs from people they’d never even met before. And let’s not forget, what better way to spend your free time than by reading a poorly-formatted pdf manifesto with text so small it’ll give you cataracts? And – don’t get too excited – you bet I’ve got detailed posts on every single one of my policies lined up for the rest of the coming week.”

Marcus’ policies include a steadfast commitment to pressuring his college to divest from all meaningful investments in fossil fuels by the end of 2022, though meaningless investments will be given more lenient treatment. He has also proposed to – definitely for real this time no going back I promise – axe Circuit laundry, acknowledging that the fourteen candidates before him failed to do so but stating that he will ask really nicely this time.

At another college that shall not be named (Trinity), elections have been postponed after a packet of chocolate digestives emerged as a frontrunner for the role of Welfare Officer. A number of students expressed their discontent at the decision to bar the confectionary from running, citing the hard work done by biscuits to sustain student wellbeing throughout the year.

In other news, CUCA member and Peterhouse JCR President Tara Lamp has come under fire after declining to respond to allegations that she awarded week 5 welfare puppy contracts to a firm in which she had personal financial interests. She also faces a backlash over a refusal to disclose earnings from a second job she held whilst in position as JCR President.