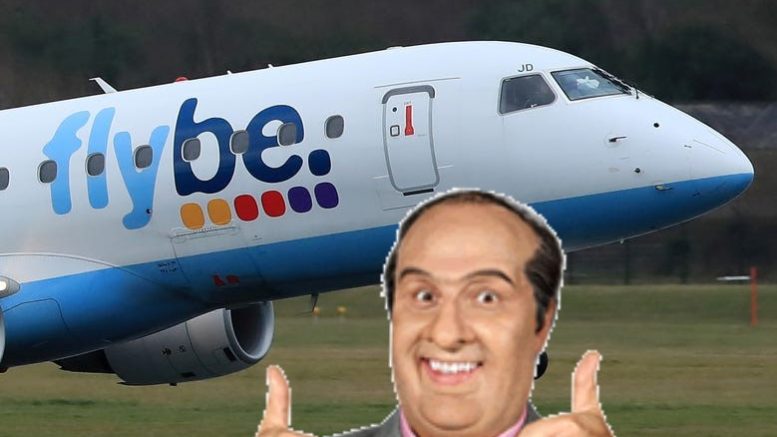 Regional carrier Flybe has been saved from liquidation after it confirmed it had accepted a last-minute rescue bid placed by Flylo owner Omar Baba.

Baba, most widely known for his appearances in the BBC documentary Come Fly with Me, expressed delight at the acquisition, welcoming Flybe into the family of Britain’s eighth – sorry, ninth – best low-cost airline.

However, in order to return the ailing company to profit, Mr Baba has conceded that a number of extreme measures will have to be taken. As a starting point, he has suggested the installation of credit-card lifejackets and a state-of-the-art ‘loveatory’ on all regional and international flights, as well as the restriction of legroom to increase seat capacity. When asked whether this would result in another misleading promotional video involving dwarves, Mr Baba said ‘how dare you?’ before erupting into a fit of apoplectic rage during which he assaulted three cameramen. He later apologised for the incident.

A number of critics have questioned Baba’s credentials as Flybe’s new owner, given the ongoing allegations of sexual misconduct levelled at him by Flylo groundcrew employee Taj Manzoor. Commenting on recent developments, Manzoor issued the following statement:

“Avatar 2, yeah, my absolute favouritest film of all time, innit, is coming out in like five years, you get me? You get me? It’s imperative that you get me, man.”

There are also fears that Omar Baba’s venture into co-ownership with Virgin Atlantic’s subsidiary company Connect Airways will lead to renewed tension with old enemy Richard Branson. Baba was quick to downplay any rumours of a feud, saying: “Richard Branson may be renowned…homosexual, but let me be clear, there is nothing wrong with bum-bum time in the sky in our beautiful modern world.”