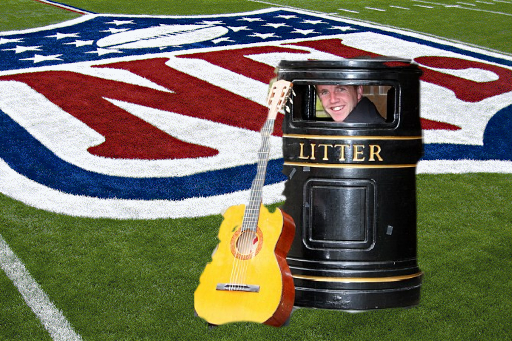 After much anticipation, the NFL and Pepsi have confirmed that JLo, Shakira and the Cambridge Bin Man will be headlining the Super Bowl halftime show this afternoon.

The show will take place at the Hardrock Stadium in Miami, the location for this year’s climactic tussle between the San Francisco 49ers and the Kansas City Chiefs.

While JLO and Shakira were announced as headliners for the Miami show in September, the Bin Man has been a recent but by no means unexpected addition to the bill. Their set list is yet to be confirmed, but it is widely thought that they will be sticking to fan favourites such as ‘Hips Don’t Lie, ‘Booty’ and a couple of the indistinguishable songs that make up the Bin Man’s repertoire. JLO showed her excitement for this new collaboration, branding the Bin Man a ‘beautiful soul’, while Shakira labelled him an ‘undeniable talent’, praising his ‘unique sound’.

Rehearsals for the show are already underway, although so far the trio of artists have said very little on what we can expect from their performance. There are rumours that the team behind this year’s show have ambitious plans to top last year’s performance by Maroon 5, leaning towards the gymnastic choreography seen in Lady Gaga’s 2017 set. As part of an innovative contortionist spectacle, all three of the show’s stars will also allegedly be performing from inside the bin, with pyrotechnicians brought in to turn the bin into a sort of human cannon for the dazzling finale.

Ever mysterious, like Daft Punk and Banksy, the Bin Man’s identity remains a mystery. Fan theories about the Bin Man’s true identity suggest that he is Ronan Keating, John Barrowman, or possibly Nicola Roberts. Some even hint that he could be former politician and Liberal Democrat leader Nick Clegg.

Meanwhile, back in Cambridge, admirers of the Bin Man, otherwise known as ‘Bin Fans’, are frantically encouraging local pubs to screen the show. It seems that his popularity is largely due to his down-to-Earth nature, with the overnight sensation telling chat show host Graham Norton that ‘you can take the Man out of the Bin, but you can’t take the Bin out of the Man’.

However, not everyone in Cambridge seems to be so enthusiastic at the Bin Man’s rise to fame. The Despacito violinist remarked that the NFL’s decision was a ‘direct snub’, while several of the generic looking teenagers who play guitar outside Boots also claimed that they had been ‘robbed’.